I have been meaning to make this salad for a while, and finally got around to it as part of my attempt to try making a different salad each week.  The reason for this recent salad binge is mainly a way to always have something easy to pack for lunch or have as a side dish or snack when we are too busy to prepare a side dish or a healthful snack.  (The ultimate goal: To have snacks on hand on hot summer days, that are as easy to scoop as the ice cream…) 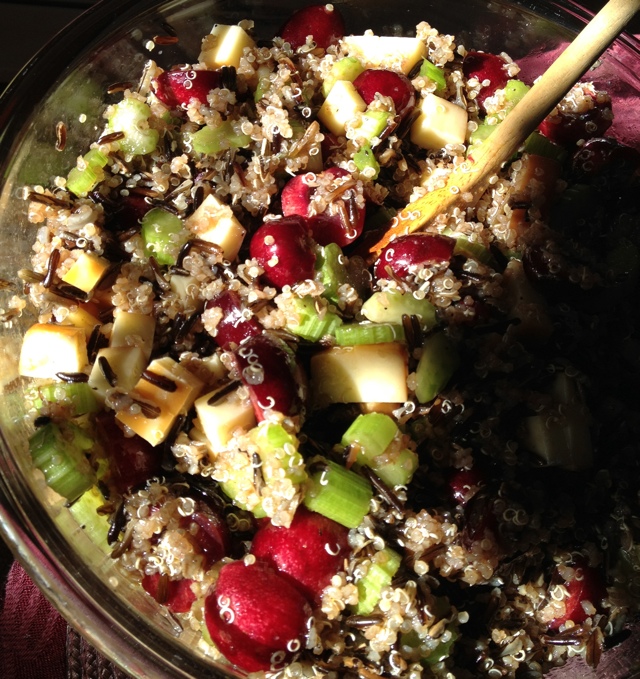 I found this recipe in the May/June edition of Eating Well magazine.  It was easy to make, and had a nice combination of flavors.  Somehow I forgot to add the pecans, which would have added a nice crunch to the salad, something I felt it was missing.  Next time I plan to use Pineland Farms smoked cheddar in this salad.

It is somewhat challenging to find places to dine when carting a 3 month old baby around, but we’re managing to find some places that we are comfortable bringing him…  One of our recent dining adventures was at Cyndi’s Dockside in Poland.

END_OF_DOCUMENT_TOKEN_TO_BE_REPLACED

In celebration of our anniversary, we went out to dinner at Fuel a few weeks ago.  We love the laid back atmosphere, friendly service, and excellent food and wine options.  I had a glass of 2004 Bordeaux, and my husband had a Pinot Noir–both were lovely with the fresh bread and butter as we waited for our main course to arrive…  (We skipped out on appetizers in an attempt to save room for dessert and coffee.) 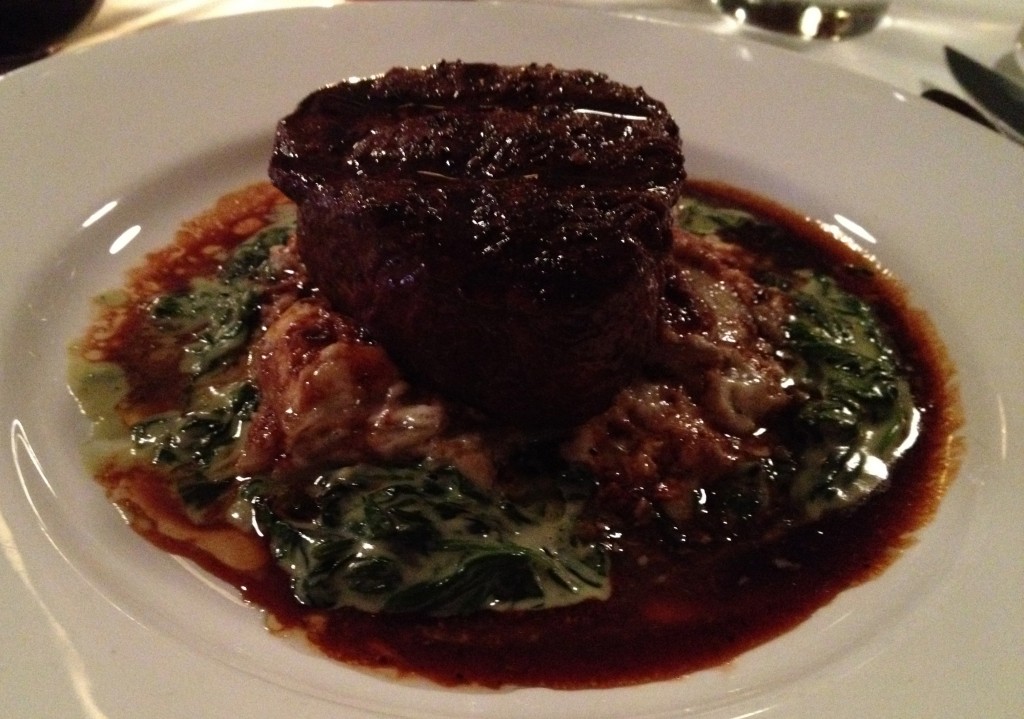 END_OF_DOCUMENT_TOKEN_TO_BE_REPLACED

On our first visit to 84 Court Street, I ordered the spanakopita but forgot to take pictures, so I thought I’d share this picture from my recent lunch visit. 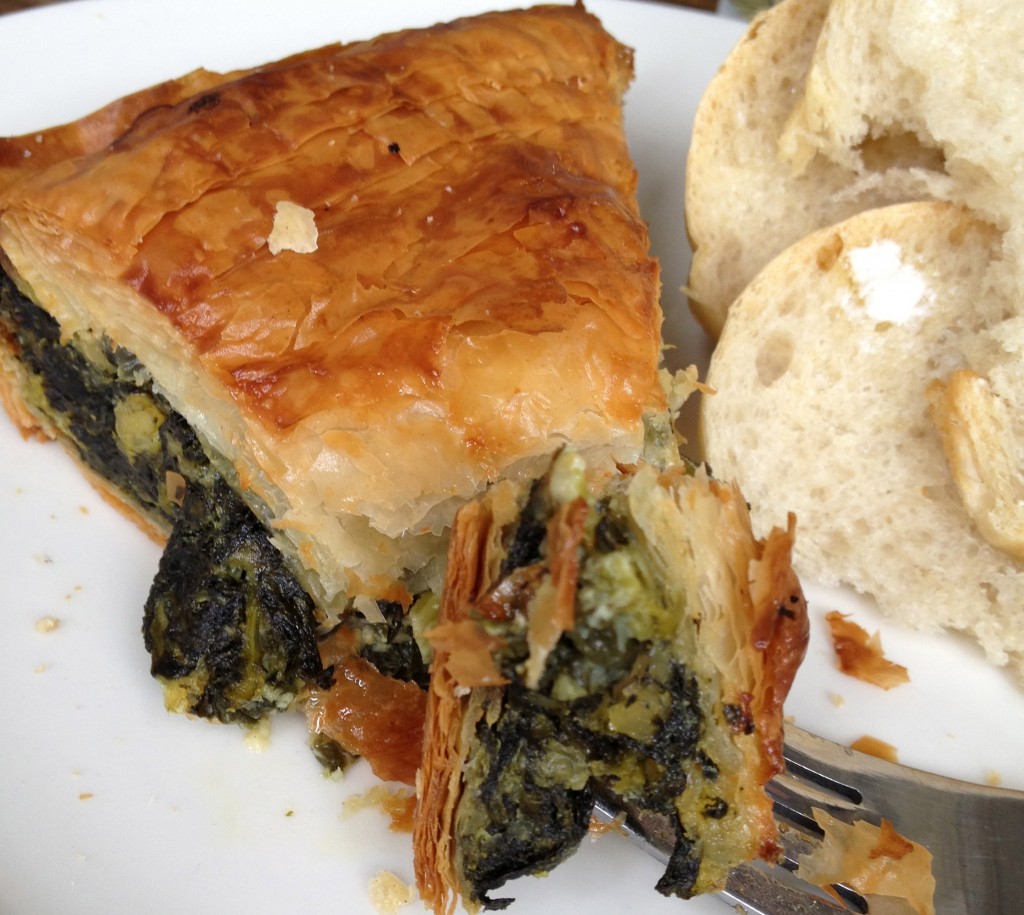 While spanakopita continues to be one of my favorite meals at 84 Court Street, there are plenty of other yummy options as well.

This recipe is one that was shared by one of the moms involved in the Babies Eat Free Facebook group.  While the main focus of the group is to create a community of support and advice for new moms who are nursing their babies, other new mom topics often arise in conversations.  This recipe idea came up in response to a request for healthful and easy meal ideas, something we can all benefit from whether we are new parents, busy with work, or both! 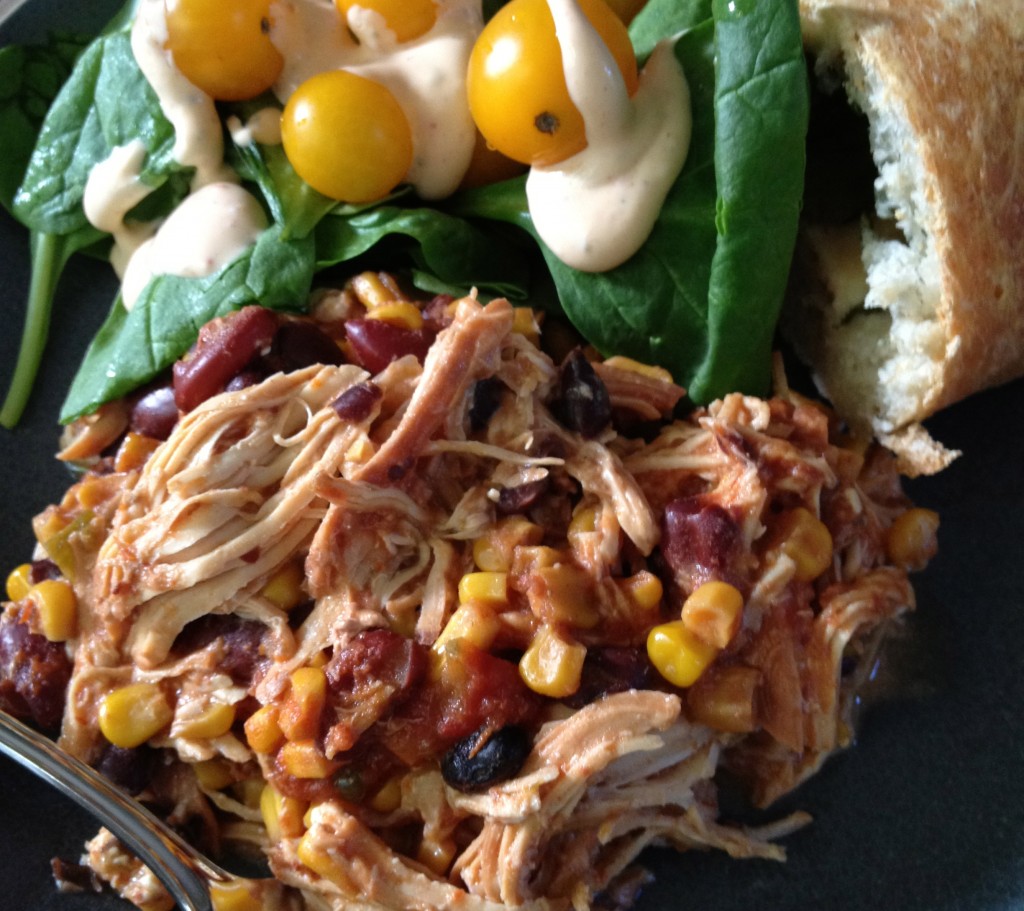 It took me less than five minutes to assemble the ingredients in my crock pot, and the end product is quite tasty and versatile in terms of allowing for a variety of “leftovers” meals.

The recipe is as follows:  Place chicken breasts into crock pot (I used five), rinse and drain beans (I used one can of black beans and one can of kidney beans) and pour over chicken.  Pour one 16 oz bag of frozen corn over the beans.  Pour one jar of salsa over the entire contents.  Cook on low heat 6-8 hours.  Place a block of cream cheese (I used low fat cream cheese) in the crock pot during the last half hour of cooking.  Serve over rice, or with a side salad and bread, or use as a burrito filling.  This dish could also be reheated and served over a salad with a little cheese on top, and a side tortilla chips.  We have had two meals already, and there is enough left in the refrigerator for two more meals.  I also froze enough for a couple of  easy meals at some time in the near future when we either don’t have time to cook or in case the weather is hot and we do not want to cook.

Some variations that might be nice (though they would involve slightly more prep time):  Top with fresh cilantro and/or chopped green onions, serve with additional salsa, guacamole, sour cream, jalapeno rings…  Include more beans and corn, and perhaps a chopped onion and/or chopped green pepper in the crock pot mixture.  For the record, I haven’t done any of these–this was a meal prepared during a sacred moment upon arriving home with a sleeping baby in the car seat.  He stayed asleep in his car seat in the house long enough for me to throw the ingredients together in my crock pot, and he woke just in time for me to throw the crock in the fridge so it would be ready to start the following morning…

This blog post is about two months overdue, but I will blame it on my one week early baby…  Lunch out at Mother India (with my mother and grandmother) was my last “foodie fieldtrip” while eating for two, and since then I have been busier than I could have ever imagined… 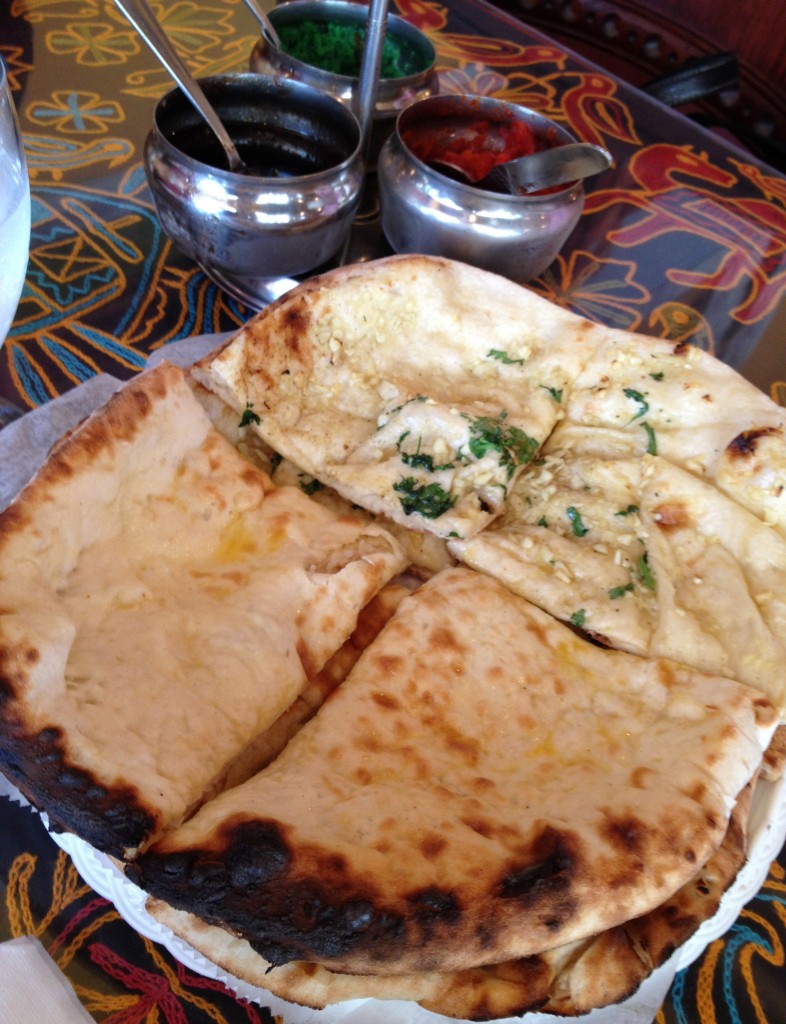 END_OF_DOCUMENT_TOKEN_TO_BE_REPLACED

Last weekend we made a trip to Forage Market on Lisbon Street to attempt brunch with our little guy. 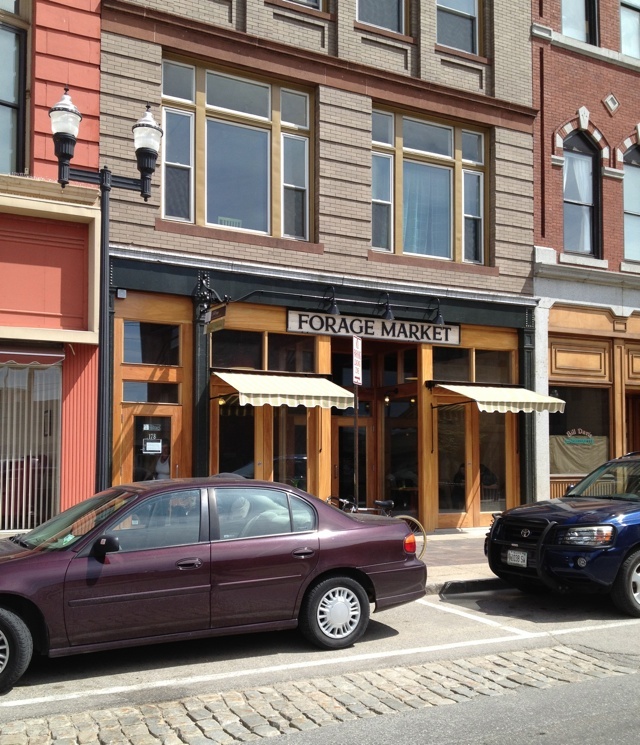 This marks our second visit to the market. Last time we enjoyed coffee and chai, and and brought home some interesting crackers made with acai berries and pistachios, and Maine made gelato. This time we tried their quiche and a bagel, both of which were delicious. 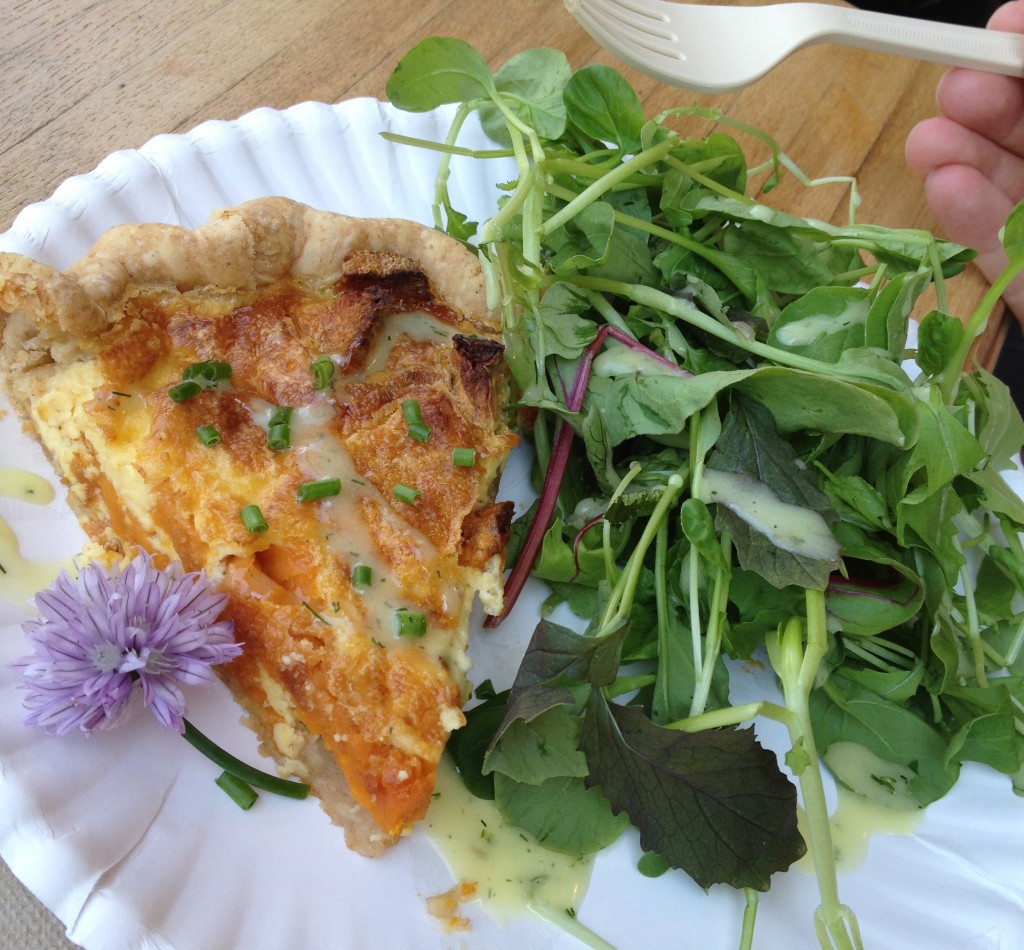 The pictures are few this time around, as we took turns walking with the stroller from our sidewalk table… After a couple of quick pictures, my focus had to be on eating while time allowed, which means I ended up eating the bagel while walking, and forgot to take a picture. The bagel reminded me of the bagels we had in Montreal–definitely some of the best around!

Posted in Foodie Field Trips, Made in Maine | Leave a comment

A friend of ours made this casserole one night when we joined them for dinner, and more recently she delivered one to our house as we began our adjustment to life with a new baby.  I have also made one batch of this casserole myself; it is that good AND fairly easy to make. 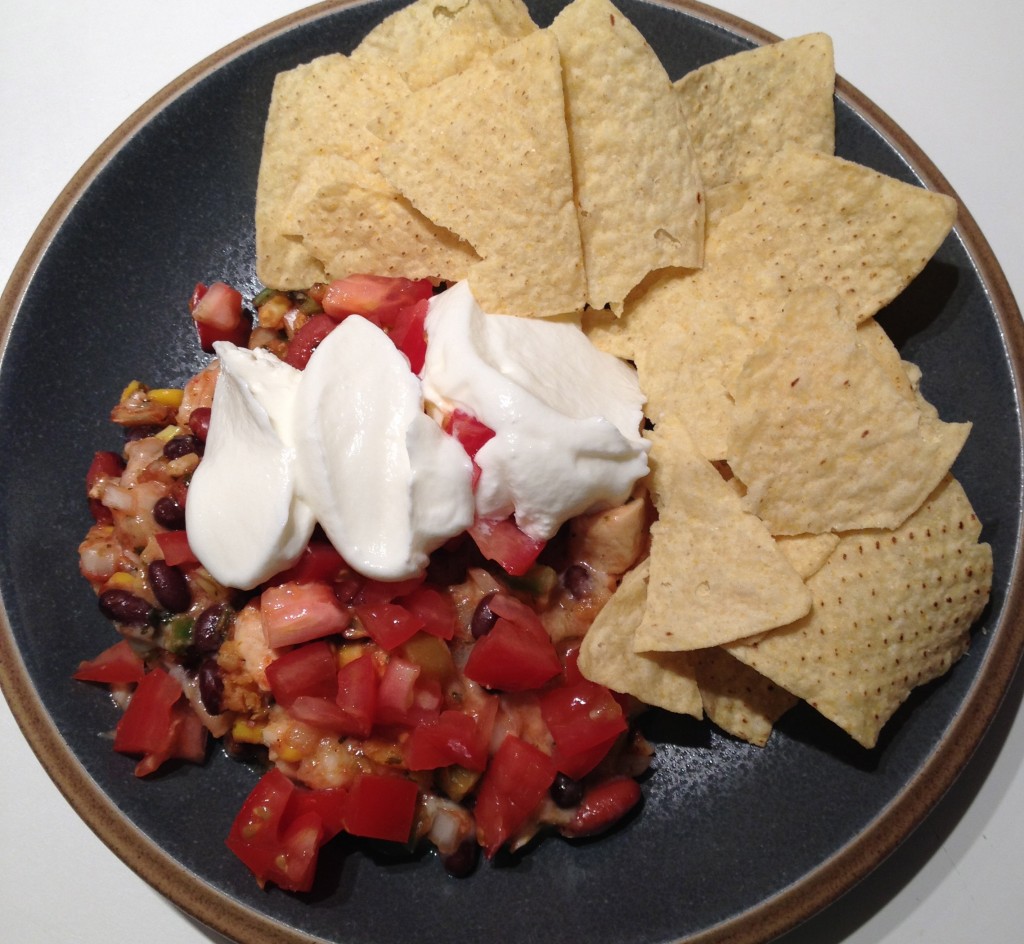 END_OF_DOCUMENT_TOKEN_TO_BE_REPLACED

One day my husband came home from work with a little treat for me:  stroop waffles.  I had never heard of them before, and thought they sounded interesting. 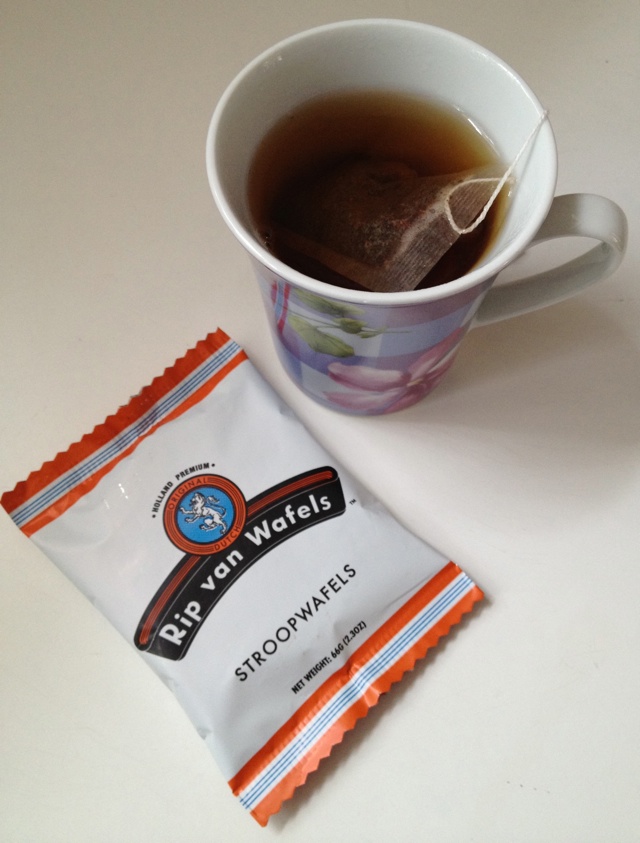 END_OF_DOCUMENT_TOKEN_TO_BE_REPLACED

One of my teaching partners came to school one day with a lunch that inspired me to try something new…  He described it as “junk bread” because you can throw pretty much any leftovers into a bread and bake it.  For that particular batch he used leftover pulled pork to fill the bread. 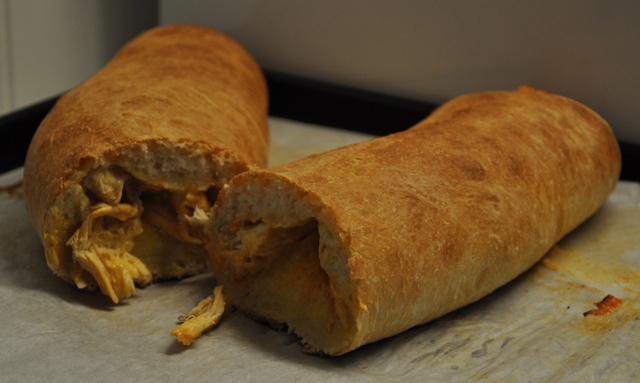 Since I had made a large batch of pulled buffalo chicken not too long ago, and had frozen some for future use, I asked my husband to make this bread with the leftover chicken, some bleu cheese, sharp cheddar, and a few extra splashes of buffalo wing sauce. 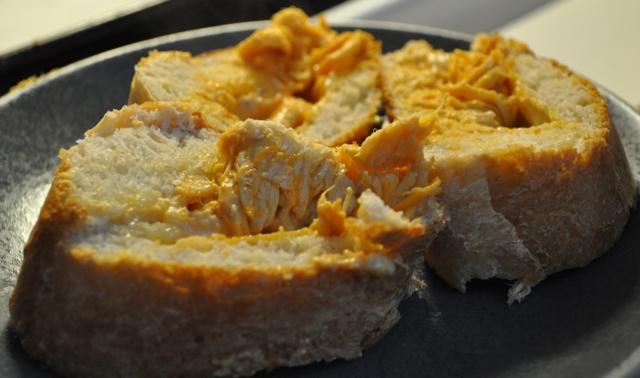 We really enjoyed the bread, and with a salad it made for a very easy dinner!  I think we’ll be making this again soon!