I’ve been craving moussaka for a while, and finally decided to make a batch of my own at home.  Having never made this dish before, I didn’t really know what I was getting myself into on a Friday night after work.  Let’s just say that it took about 90 minutes to prepare the different layers of this dish, then about an hour of baking time before we had our late night dinner. 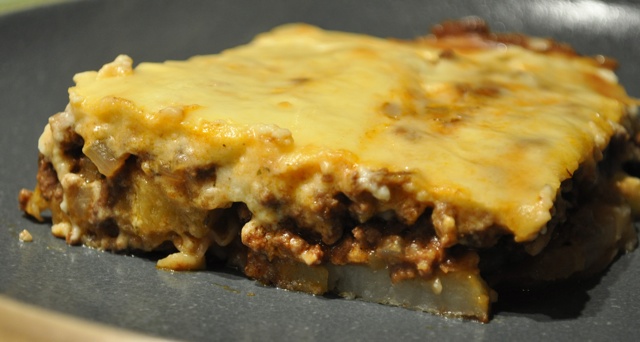 Since I was working with a somewhat shallow casserole dish, I made this batch with one layer each of potatoes, eggplant, meat, and bechamel sauce.  Next time I might try making it in a deeper baking dish to allow for more layering.  I used Emeril’s recipe as a guideline, which may or may not be terribly authentic, but it did taste good.  One of the modifications I made was to brush the potato slices with olive oil and bake them in the oven instead of pan frying them.  I mainly did this to save time, so the potatoes could cook while I (gasp) fried the eggplant.  I used a bit less eggplant than called for, as I was afraid I wouldn’t be able to fit it all in the casserole dish.  I also used 1 pound of ground beef, omitted the lamb, and doubled the red wine.

For the love of food and cooking, and the adventures both inspire...
View all posts by Kellie →
This entry was posted in Casseroles. Bookmark the permalink.