My favorite things about MOFGA’s (Maine Organic Farmers and Gardeners Association) Common Ground Fair are the wide variety of interesting and delicious foods available, and the informative presentations related to organic farming and environmental awareness.  After waiting in a long line of traffic to get into the fair, I was ready to start grazing when we finally made it through the gates. 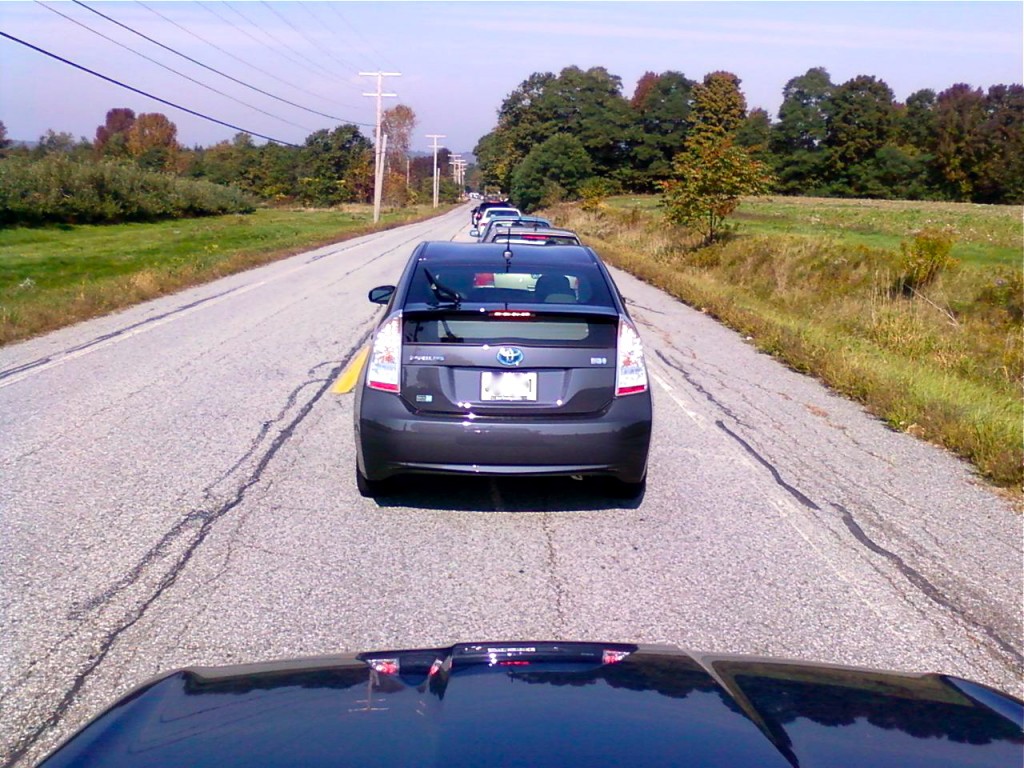 Our first stop was at the Shiitake Fry stand.  The mushrooms served at this stand are grown at the Shiitake Farm in Rumford, Maine.  I have seen this stand many times before, but have never actually stopped to try their product until this visit to the fair. 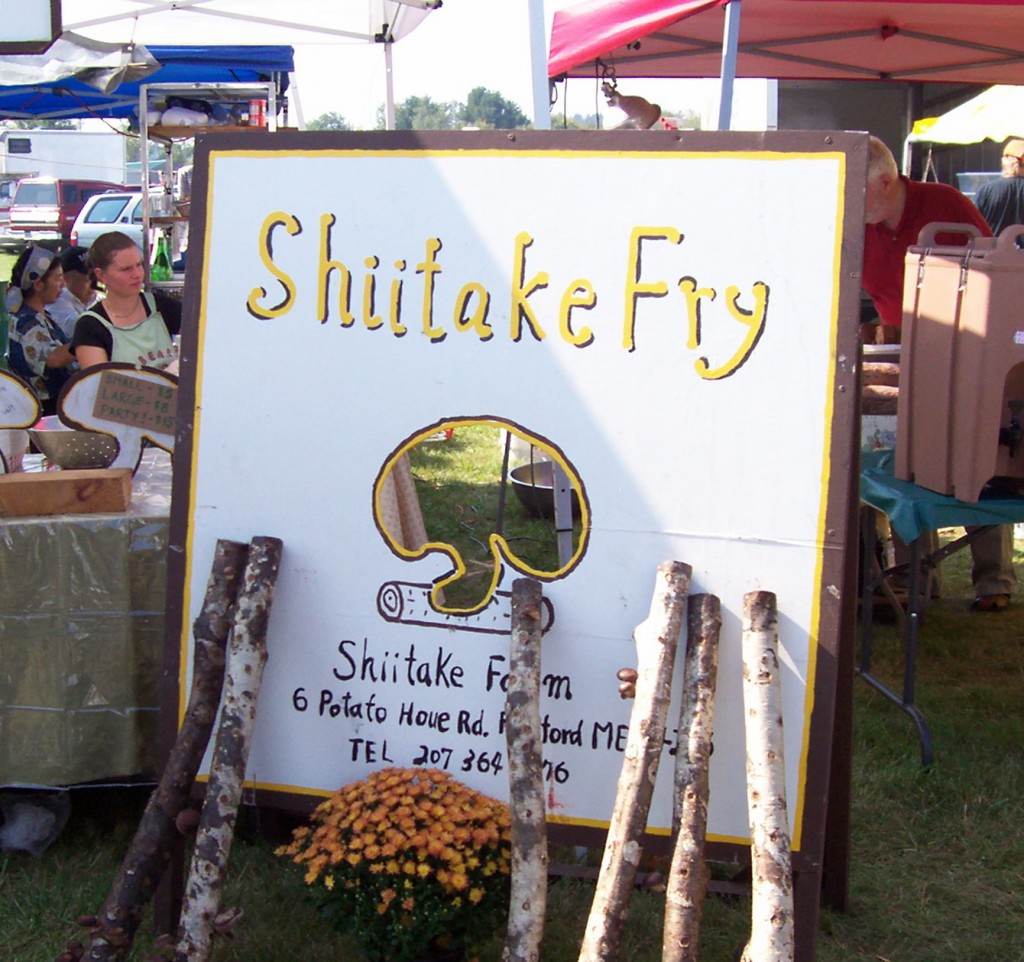 The fried shiitake mushrooms had a consistency that reminded me of fried clams, but with a savory mushroom flavor.  I know they weren’t the most healthful choice, but they were delicious!  A recipe for Toshio and Kalin Hashimoto’s famous Shiitake Fry recipe can be found on the Saveur website. 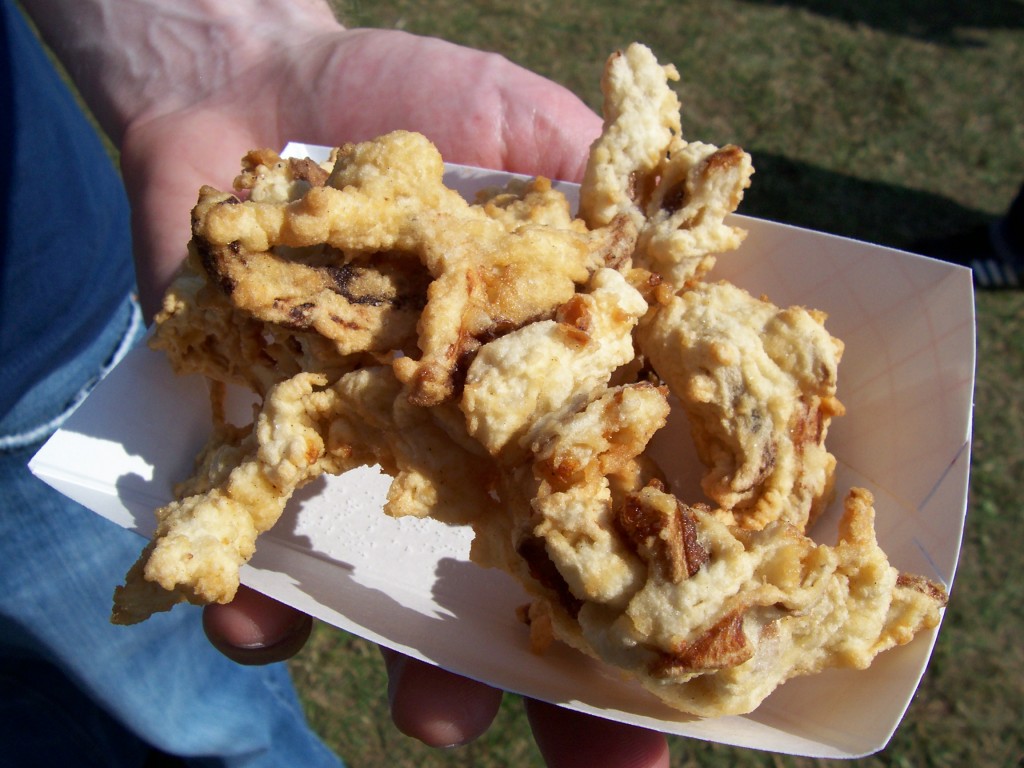 After walking through a few craft tents, we made another stop for food.  This time we visited the Apple Honey Bun stand. 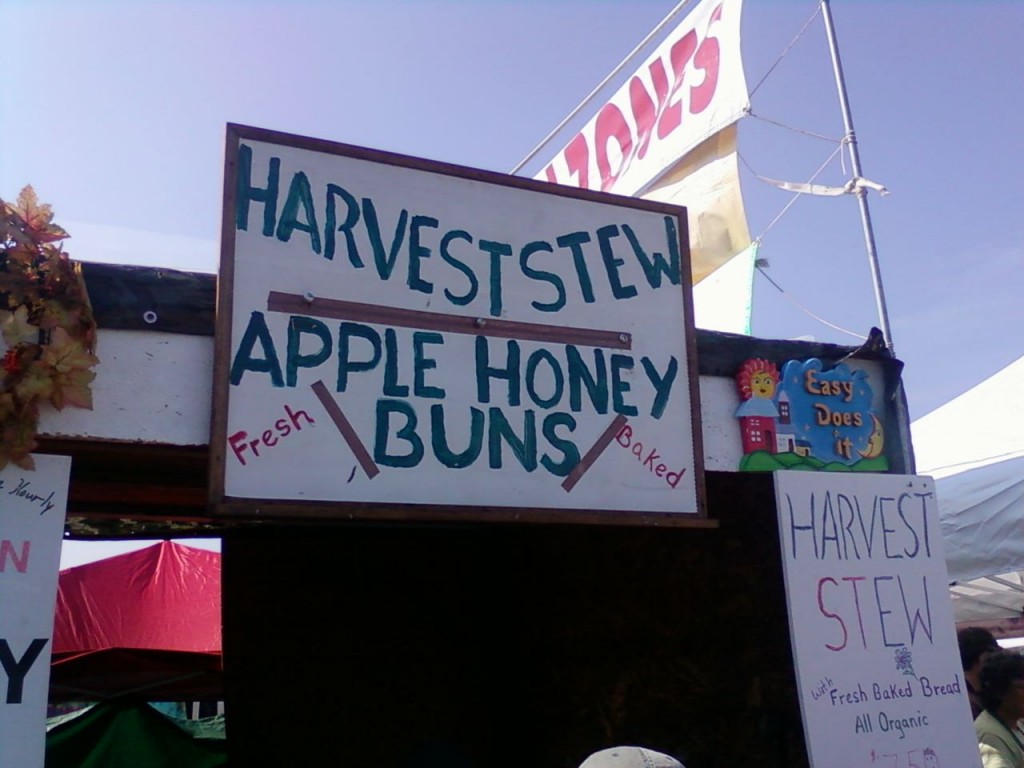 I have never had an “apple honey bun” before, and really enjoyed this one.  It was made with whole wheat flour and the bun itself was only slightly sweet, and still warm.  When I broke the bun open, the steaming contents released a beautiful aroma of fresh apple, nuts, raisins, and cinnamon. It was topped with a drizzle of honey, which added just the right amount of sweetness.  I think I’m going to try making these at home sometime soon… 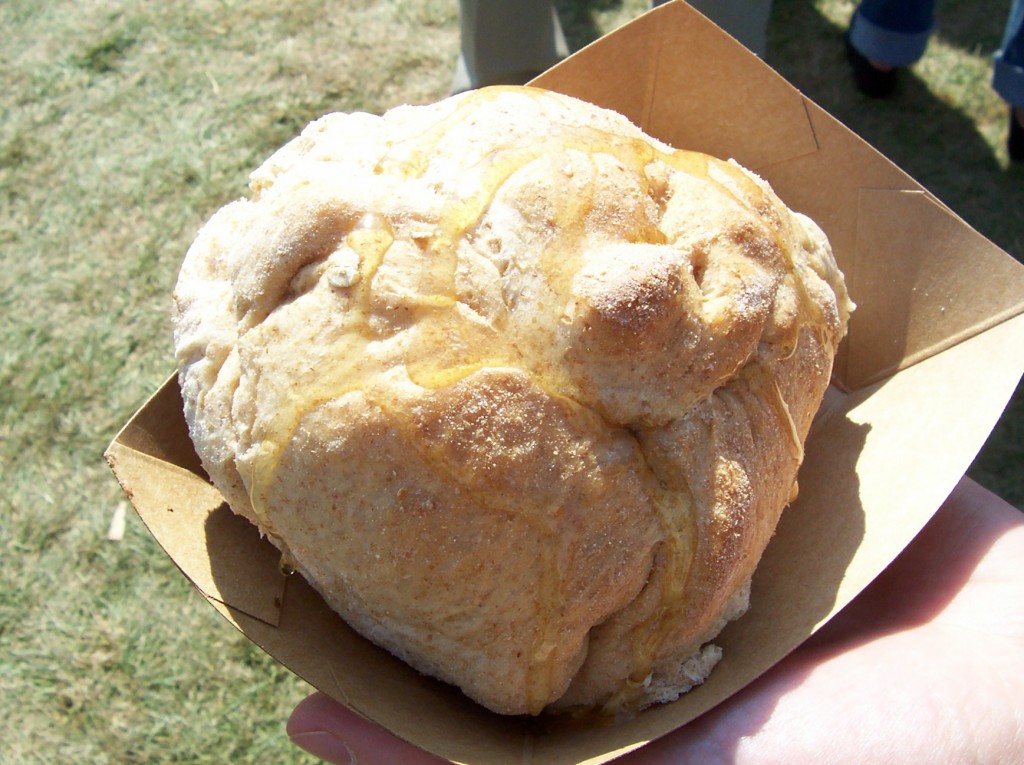 After carb-loading, we walked around a bit more, and sat in on a talk about raising quail and another about raising heritage chickens.  We saw the border collies and livestock, and strolled through a barn filled with tables of prize-winning produce. 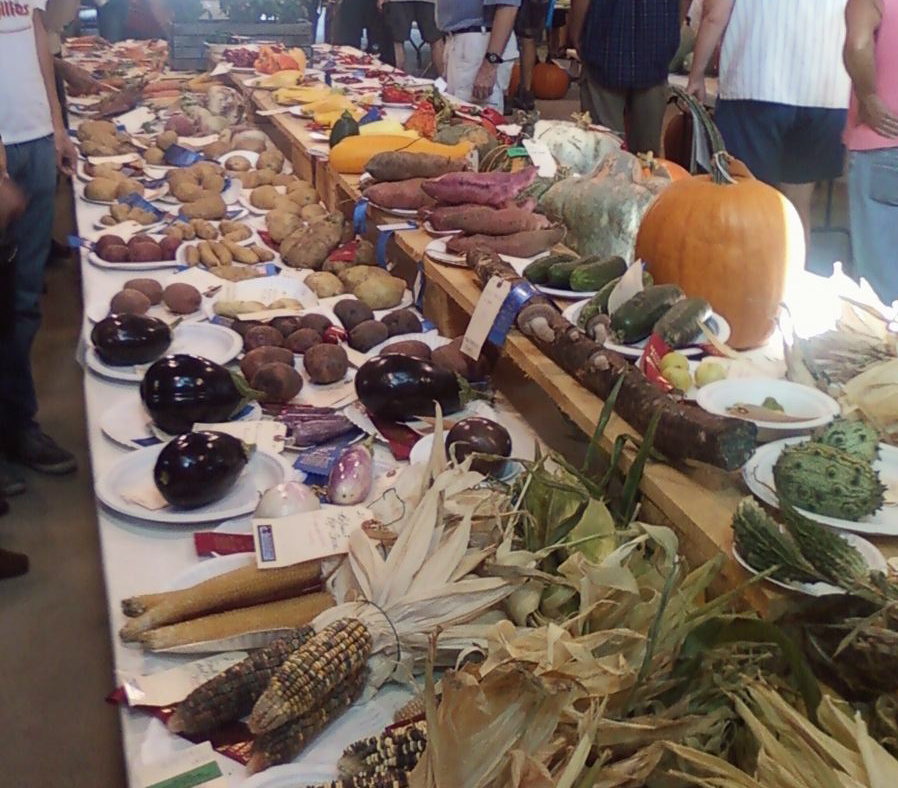 I was impressed with the variety of fruits and vegetables on display, and especially envious of the people who were able to grow these beautiful tomatoes. 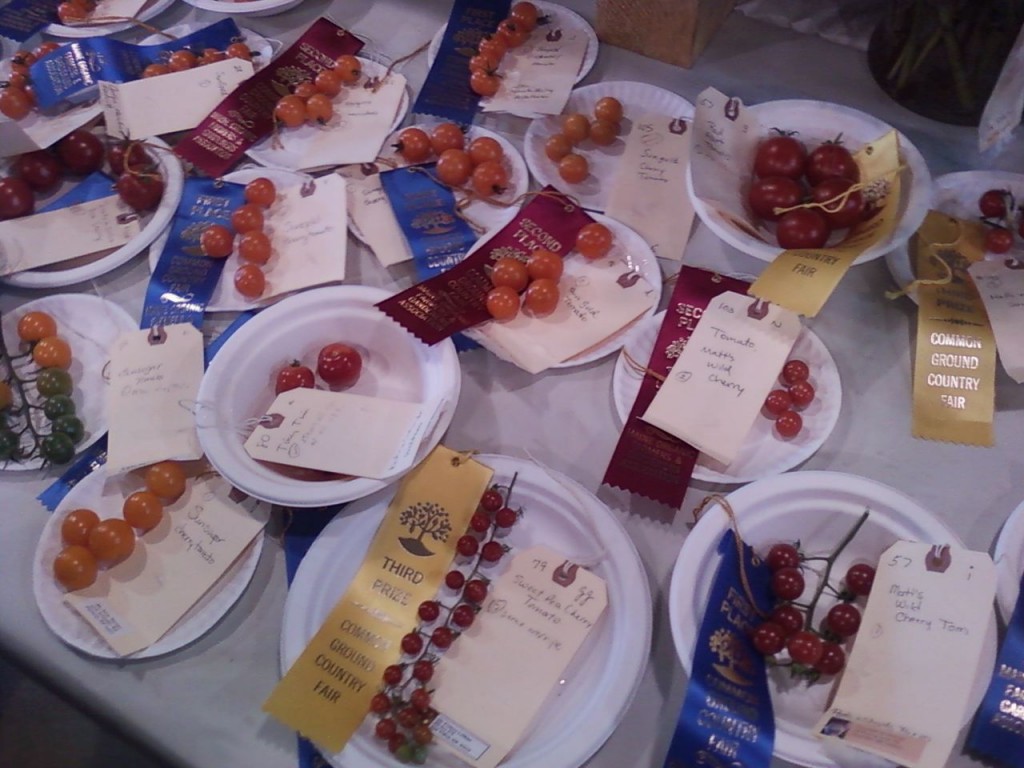 I wanted a pie cone, but when I saw that the line was about fifty feet long, I decided our last snack would be a plate of potato chip fries, lightly salted and sprayed with cider vinegar.  The fries were served piping hot, and made for a lovely snack while listening to a live band and watching children “sled” down a grassy hill on flattened cardboard boxes. 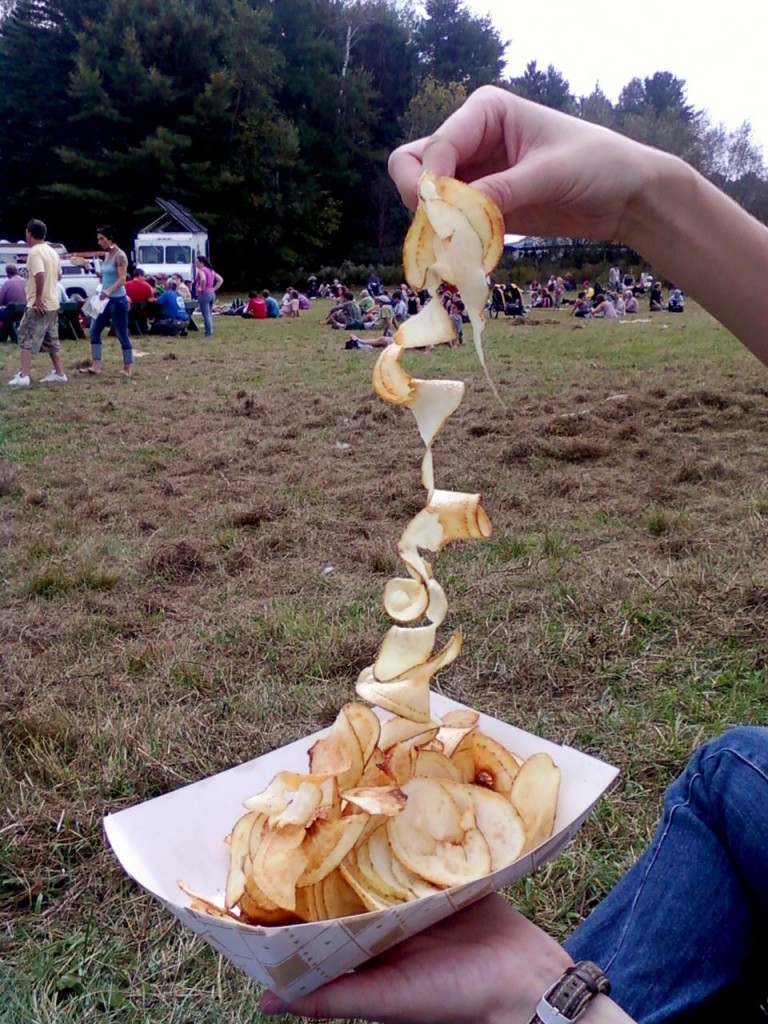 Before leaving the fair, we purchased a couple of items to enjoy at home:  Pure Maine Maple Cream from Kinney’s Sugarhouse in Knox, Maine, and Organic Whole Plant Blueberry Tea from Highland Organics in Stockton Springs, Maine.  Both wonderful products will remind us, in the cooler months ahead, of the beautiful Summer-like day we enjoyed in Unity, Maine at the Common Ground Fair.

For the love of food and cooking, and the adventures both inspire...
View all posts by Kellie →
This entry was posted in Bread, Foodie Field Trips, Made in Maine and tagged Common Ground Fair, MOFGA, Shiitake Farm. Bookmark the permalink.